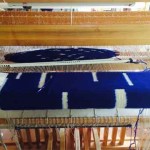 The ikat weaving is going amazingly fast, (maybe because I’m enjoying the trashy novel I’m listening to) although it may not be exactly as planned. The motifs are not always aligning in the expected places, but I just adjust and keep on weaving. The problem is my logic and math skills, or lack thereof.

I weave at 24 ppi, which means that there are 12 wraps around the selvedge threads. 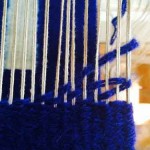 Twelve wraps around a peg on the ikat board makes a really big bundle, and it’s hard to wrap that bundle to get a good, clean edge on the design motif. So I decided to wrap in 1/2 inch increments. For some reason, I had it in my head that my cartoon would need to be stretched by 2 in order to get the motifs the correct size in the weaving. So wrong! For the first time, I have been measuring the motif in the weaving and writing the size on the cartoon, along with measuring the design motif on the cartoon also. The most that those measurements have is a discrepancy of 1/2 inch–the weaving being larger. Keep in mind that this is a cartoon stretched two times its original size. Does this mean that if I had used the desired finished size in the cartoon and still wrapped the yarn for ikat in 1/2 groups, the weaving would be exactly that size? My head is spinning, and I guess the only solution is to try it. In the meantime, I have enough wrapped sections to weave another piece. Do I really want to weave the same thing again? 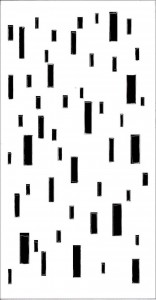