I flew to Charlotte today to deliver the boys back to their parents, definitely a bittersweet event. After meeting their parents in the airport, I then went through security again and caught my flight back to Texas. I really don’t mind waiting in airports. I’ve always got something to read and frequently take my sketchbook “just in case.” Both of the flights today were full. I have a vague recollection of flights with empty seats, but that’s a thing of the past. The lady across the aisle from me caught my attention because of the book she was reading, One Thousand White Women. A friend told me about this book years ago, and I found it to be a very interesting read. Below is a partial review from the Amazon page. What I found so astounding is that it reads like a true story. I had to keep reminding myself that the book is fiction. Anyway, the lady was reading this book for her book club, and we struck up a conversation, not the kind where you’re talking all the time, just occasional bits and pieces, the best kind to have with strangers. 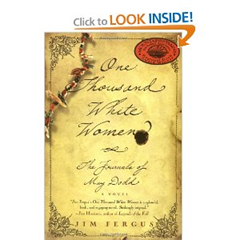 Long, brisk, charming first novel about an 1875 treaty between Ulysses S. Grant and Little Wolf, chief of the Cheyenne nation, by the sports reporter and author of the memoir A Hunter’s Road (1992). Little Wolf comes to Washington and suggests to President Grant that peace between the Whites and Cheyenne could be established if the Cheyenne were given white women as wives, and that the tribe would agree to raise the children from such unions. The thought of miscegenation naturally enough astounds Grant, but he sees a certain wisdom in trading 1,000 white women for 1,000 horses, and he secretly approves the Brides For Indians treaty. He recruits women from jails, penitentiaries, debtors’ prisons, and mental institution, soffering full pardons or unconditional release.

When I arrived to my seat on the return flight (which was extremely slow in boarding because of all the carry-on luggage), an older couple was sitting in my seat. Them seemed a little confused when I told them that my seat was D, but I attributed that to maybe being a little confused about flying. This is one of those times when I could kick myself. At the end of the flight, and their naps, I noticed the gentleman looking at his tickets. So I casually asked where they were going. He told me he didn’t speak English, so I asked in Spanish. He beamed and said they were going to Phoenix, that his son lived there, that they’d left at 5 AM from South America, Quito. What a missed opportunity! We could have been having casual conversation also, but this time in Spanish! Quito is one of those places where I want to go someday, along with Perú. Oh, well…

Time to get back to normal around here—clean up toothpaste spills, go to the grocery store, etc. And of course some weaving. I’ll have pictures of the beautiful skeins of blue tomorrow or the next day.