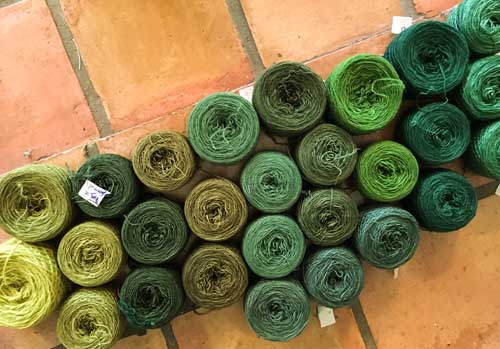 27 skeins of balled up green

Have you ever spent a day balling up skeins of yarn? Except for the tangles in the new yarn I’m trying, a pretty boring experience. I tried doing it while listening to a book. Works most of the time, but then the squirrel cage gets to going so fast that it rattles noisily and I can’t hear the audio. And about those tangles…all that glorious kinkle that I wrote about earlier, just doesn’t seem to want to disappear, no matter how many times I pop those skeins. I start winding and all of a sudden, my winding yarn is under another strand and just won’t release. So, I cut and tie and move on. Until the next time, which means that balling up 27 skeins of yarn took a looooong time. Now, those skeins that I wound myself? Perfect. Even though they are with a singles wool, perfect. Love my skein winder. 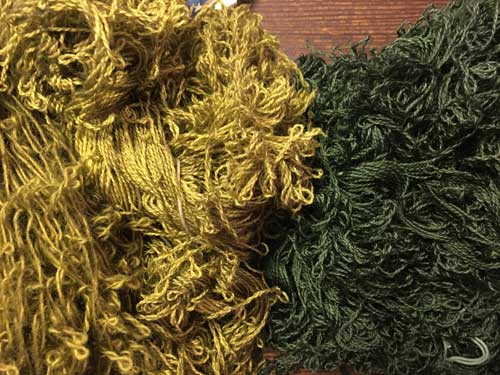 Here’s the weaving so far. Sorry about the head shadow, but at least I caught that I took a picture of my thumb! You can barely see the new color I just started on the right. Now my fear is that all these greens, although they look so distinct in balls, won’t look that way in the final weaving. Gotta have something to worry about, right?

I’m curious — How many of you belong to a guild of artists/artisans? Weavers, potters, painters, quilters, etc? Do you belong to a group that meets and has programs? Do you have a guild sale? My guild, Fort Worth Weavers Guild, has finally obtained non-profit status and we are now allowed to have a sale again. We used to have a sale along with our biennial show, but the lack of non-profit status and the state sales process caused us to stop. We’re back! We will have our first-sale-in-a-long time April 27. But for now, I’d like to know about public events your guild/group has. Shows? Sales? How do you plan it? Carry it out? Share and maybe inspire and/or help all of us.