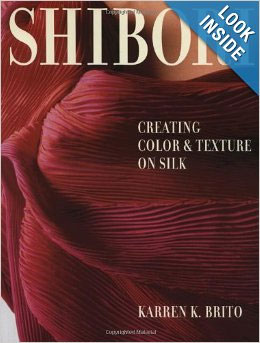 Something I’ve never done before–used the interlibrary to request a book from my local library. Wow! Worked great and fast! I can’t remember why now, because I’m probably not going to do shibori any time soon, but I put the Karen Britto book Shibori: Creating Color & Texture on Silk in one of my wishlists in Amazon. The book may be out of print, which may explain the price, but before spending $35, I wanted to see it. Thus the interlibrary. After looking at the book, I may spring for the $$$. Ms. Britto talks about the two kinds of dyes I’m currently using, but more importantly for me, there’s a chapter on using the Munsell color system. I already have those chips and would like to use them effectively. The problem for me is the dye samples. I will have to figure out some way to dye small batches of possible colors with the equipment I have. Well, and find time too.

Seems I spoke too soon about our fall weather–winter is scheduled to arrive with a vengeance tomorrow. I hope it doesn’t bring that “wintery precipitation” with the winds. The Kimbell Museum is set for members’ tours of the new Piano Pavilion. I have listened to a couple of programs about this new space on the radio. Evidently the concrete used for the walls is a special type and seems to be a better background for many of the artworks. Doens’t that sound strange? Something I’ve never thought of. Maybe I’ll get to see for myself soon.

And a totally off topic question–Do you have a ball winder recommendation? I have a really old plastic one that works, but frequently the gears click as I wind, so the writing in so on the wall. Some of these ball winders are REALLY expensive, so I want to hear feedback from anyone about ball winders.

I wrote about Death of a Dyer here. Briefly, the book is a mystery set in 1796 in which the main character is a traveling weaver. That fact and the title compelled me to check the book out and start reading.

Within the first chapter or two, I had to do a little research, and that always takes me down a few rabbit holes. Here’s what I’ve learned:

Nankeen-a quote from Wikipedia. If you follow the link, you will see a picture and a bit about stencils and indigo on nankeen cloth.

Nankeen, also called Nankeen cloth, is a kind of pale yellowish cloth, originally made at Nanjing from a yellow variety of cotton, but subsequently manufactured from ordinary cotton which is then dyed. Also in the plural a piece or variety of this cloth.

Southern Exposure Seed Exchange had nankeen cotton seeds before they were destroyed by a fire. I was glad to be reminded of this company because they have lots of interesting seeds there—worth a look.

As the title says, there is the death of a dyer, so dyestuffs are mentioned, like Spanish Red. I’ve heard of Turkey Red, but not this one. That is, until I looked it up. Spanish Red is actually cochineal. The Spanish settled in the Americas long before the pilgrims came to North America, so the red dye was already in use. Like cacao becoming a desired food, cochineal was a valuable dye material. So, even though I am familiar with cochineal, I still found some articles that are interesting. There are a few of them below.

This Washington Post article by Diane Ackerman is really a book review, but it’s still interesting. The book is A PERFECT RED: Empire, Espionage, and the Quest for the Color of Desire by Amy Butler Greenfield.

I recently was in Arizona (I spent one night with Barb Nelson) and saw a type of prickly pear that’s purple. I wish I had taken a picture of one that was covered with cochineal bugs, but we were driving down the street. If you’re interested, you can see a picture here..

Scutching was mentioned, and I was pretty sure that it has something to do with linen, or rather flax. But scutching knife? There was one that was sold on eBay.

I finished the book, although I really did not enjoy it very much. Turns out that a travelling weaver has a loom that breaks down quickly. Hmm… One small complaint—the dyer had been using local plants to find a green that was all the rage. That’s a problem since most greens from natural dyes are actually a two-step process using indigo (or woad) and overdyeing with weld or another yellow dye. Again, Wikipedia has a nice article about natural dyeing.

Visual obsession, that is. And it’s really only a mild obsession, as obsessions go.

On Friday I took an art workshop at the Kimbell Art Museum. The title was Ode to a Cloudy Day. 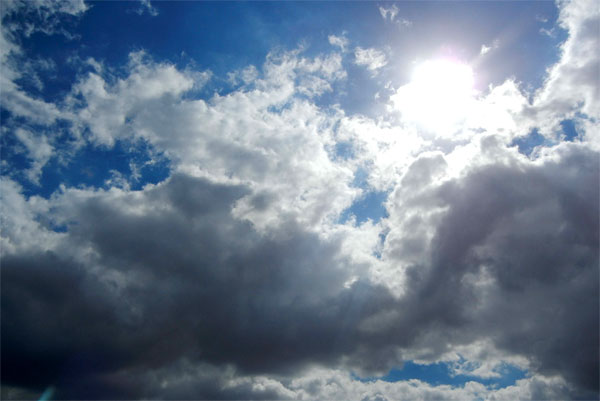 After a brief orientation about what we were going to do, docents took small groups to view several paintings of the permanent collection, with a focus on the 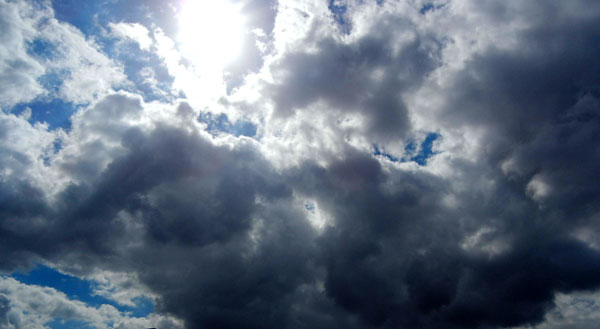 clouds. Then we went to tables and used acrylics to paint clouds. For me the painting was free and loose—I am not a painter—and fun. Not that there was any resemblance to a sky full of clouds! But this subject is one that has kind of obsessed me for a few years now. I say that it’s a mild obsession, but I have taken the next exit in order to stop and get a picture of what I perceive as a fascinating cloud. What a surprise, though, that there are others out there with the same obsession. 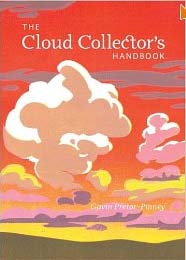 There is a book for collecting clouds in much the same way that a  bird watcher would collect birds. There is even a website for cloud lovers called The Cloud Appreciation Society. Wow! Who knew! Then when I got home, a friend happened to comment about a Facebook page about clouds.

Several months/years ago, I found a painting about clouds that just really spoke to me. I don’t know where I found it, but it’s by John Fincher. I love the drama and varying shades of gray in these paintings.
So, with a little research, I found another one by him. Then there’s Georgia and her clouds.

Do you have an obsession?