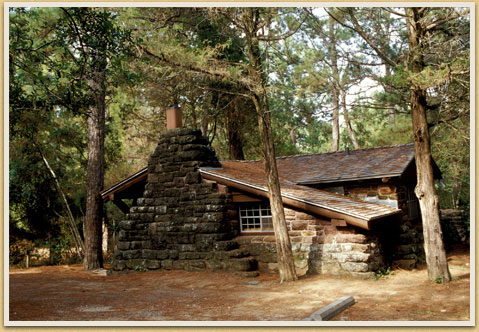 Last week our local newspaper had an article about the CCC, the Civilian Conservation Corps. The CCC is important to us still here in Texas because so many buildings, roads, dams still in use. But the members of my family have another connection–our father was in the CCC. At a very young age, he took the first trip, perhaps out of the state of Texas, and went to the “wilds” of California. When he talked about those times, he mentions how hard things were then (and believe me there are a lot of those kinds of stories) and how what a great program the CCC was. The boys were taught skills and most of the money they earned was sent home to help their families. He later returned to Texas and helped build the buildings at Bastrop State Park. In 2011, the state of Texas was besieged by wildfires. Below is a quote from the park site.

In September2011, Bastrop State Park and the surrounding pine forest were stricken by wildfire that affected 96 percent of the park. However, firefighters were able to save the historic cabins and facilities that were constructed by the Civilian Conservation Corps in the 1930s. The park is recovering from the fire, and most trails, campsites and facilities have reopened to the public.

I do understand that other places deal with fires even worse than the fires of 2011, but it was a new experience for us here in Texas. I became so obsessed that I carried certain keepsakes in the car, just in case I needed to evacuate. And in case you’re wondering about the piece at the top, it was part of my obsession. And if you have time, read the newspaper article about the anniversary of the CCC. There are some good pictures of some of the projects they built and black and white photos taken on the various locations in the 30s.