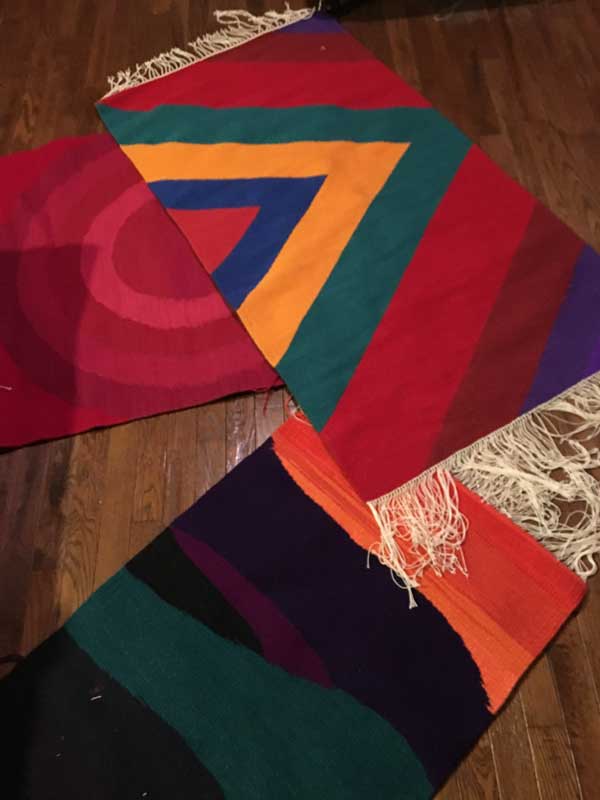 So, instead of weaving, this is the finishing portion of my work. Our guild is having a sale April 30, so I decided that these pieces that have been rolled up in a basket, need to be finished. At least one of them does–I’m still not sure about the others. And this picture shows only three of the five that are woven but unfinished. Do you ever take things off the loom (or whatever type project you;re working on), and just don’t like it? Or sometimes it’s been so troublesome you just don’t want to look at it again? The big half-diamond piece is getting fringe, something I haven’t done in years. For some reason, fringe just seemed appropriate somehow. You can see at the top that one end has been completed. The others will have their ends woven in, or not, as in they might not get finished after all. Both were experiments. Sometimes experiments are just not very successful.

The Modern Art Museum of Fort Worth is have a Frank Stella retrospective exhibition that begins this weekend. I don’t think I’ve ever seen Frank Stella’s work, but surely that’s not true. I’m sure MOMA or the Whitney or some other museum I’ve been to in Philly or Boston has one or two, but at the moment I don’t remember seeing them except in pictures. I’m really looking forward to this exhibition. I’ve also added the movie portion of the museum’s offerings to my membership in an effort to get out more. It’s so much easier to not get out. Working on it… There are other exhibitions this weekend and next that I’m going to try to get to. One is in Granbury, a quaint town about 45 minutes away, and one is in Dallas.

They say we may have more severe weather this week, which includes hail. Maybe I’ll call the insurance adjuster in August. At the rate we’re going, you could get a new roof and have to replace it the next week.

In recognition that’s it’s the little things that count–the taxes are done and the mower started. Pretty exciting stuff!