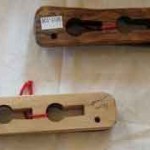 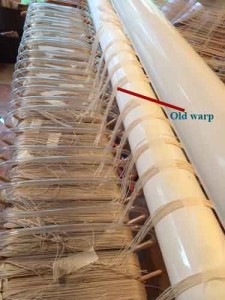 This is how things looked after getting the warp on the beam and before tying to old warp.

I’m sure others can do this whole warping and tying on to an old warp in a much neater way. Maybe I’ll be able to do it also after another few dozen efforts, because I learn something NOT to do every time.

Before all the tying of warp ends, here’s what it looked like. A little less chaotic. The lease sticks had been inserted into the old warp and placed into the lease stick holders. Then the whole business of tying individual ends. 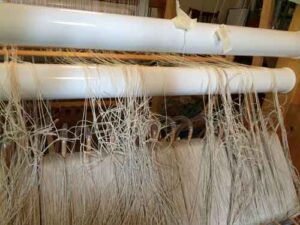 After all the ends are tied–total chaos! 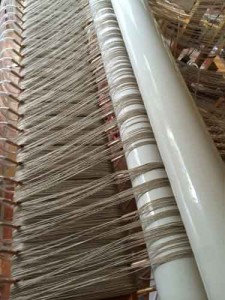 The linen is being used double and the old warp is single.

The tah dah moment after all the knots have passed through the heddles and reed. Doesn’t a warp look good on the warp beam coming over the back beam?

On and my careful calculations as for as warp needs? Wrong! But the error has been corrected for the future. My spreadsheet:

So what did I learn this time?

Had to add one last thing. Linen is very slippery. I had been told that but didn’t really consider it. This is the first warp that I’ve had that will just slip out of the heddles as you work on one of its neighbors!