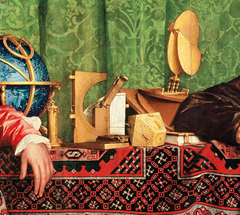 Detail: Hans Holbein the Younger, “The Ambassadors,” 1533. The painting is notable not only because its carpet is the one that gave rise to the term “large-pattern Holbein,”but also for its curious rendering, near its bottom center, of an anamorphic skull, discernible as such only when the painting is viewed at an acute angle. NATIONAL GALLERY, LONDON / BRIDGEMAN ART LIBRARY

The picture above comes from an interesting article in Saudia Aramco World magazine about Oriental carpets as depicted in paintings. There are sidebars about dyeing and weaving, with mention of Bohmer, the researcher of natural dyes used in the old pieces and writer of a book on natural dyes.  He started DOBAG to renew the process of using natural dyes.  I would love to own the book, but it’s about $300.

My first dyeing was with natural dyes, and I still love the idea of natural dyes.  But for the sake of speed and a good black, I gave up using them for the faster acid dyeing.  I know more now about dyeing in general now and might go back to natural dyes at some point.  Two of my favorite finished pieces are done with natural dyes.  And the piece that was the guild raffle was dyed with cochineal, indigo, and madder.  I have a bed of madder that needs to be dug in the spring, and have indigo seeds that need to be

grew weld one year and love the color obtained—beautiful, clear yellows—and the greens from overdyeing with indigo are wonderful!