We just spent several days in Philadelphia for a history and art vacation. Even though we had a rental car, after a very frustrating day of trying to get around in the city, we parked the car and rode the bus. Our hotel (Penn’s View) was perfect for this, since it was on the end of the line. In addition, the neighborhood had several very nice restaurants within walking distance, even after a walking-all-day of sightseeing. We found that everyone was very nice and helpful in our efforts to understand the bus system and trying to figure out where to get off.

We arrived in Philadelphia Monday, September 14 around 4. After settling into our hotel, we went for a walk around the neighborhood. We went to a Spanish restaurant that I’d read is supposed to be good, and it was delicious. Since it’s restaurant week here in Philly, we each chose 2 items from the appetizer list and 2 items from the main list. This place is know for its tapas, so the servings are tapas sizes. This was a great meal!

First full day in Philadelphia—went to Independence Hall, Liberty Bell, saw Dr. Phil filming (what’s up with that?), had a cheese steak (not my favorite thing,  but hey, you gotta try ‘em), and went to the Italian Market area.  I always love this kind of neighborhood. Wonderful cheese shops, etc. Stopped and had coffee here. 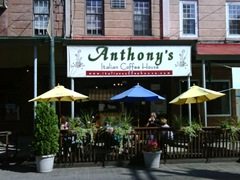 Although with road construction it was difficult, I am really glad we were a

ble to visit the quarters where George Washington stayed while at Valley Forge. The house was very interesting as were the grounds. Amazing that ships could come up the Schuylkill River close to Valley Forge and goods transferred to barges which traveled in the creek in front of the house at Valley Forge. 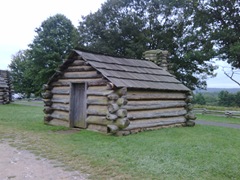 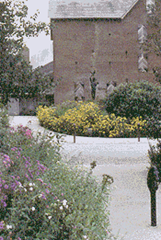 We arrived at the Brandywine museum just in time to join the tour by Victoria Wyeth. 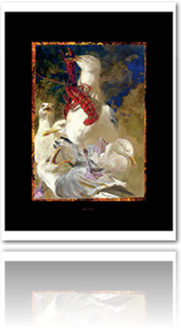 This is an exhibit of the usual sins of gluttony, lust, etc, but with seagulls instead of humans committing the various sins. I will never look at seagulls in the same way again.

I don’t think I had realized that it is N. C. Wyeth’s illustrations in the books of Treasure Island, The Boy’s King Arthur, The Last of the Mohicans, Kidnapped, and others. Ms. Wyeth mentioned being read the stories from Treasure Island and the real painting from the book is hanging on the wall across from her bed.

Philadelphia Museum of Art is an amazing museum. On the third floor tapestries completely surround the atrium. 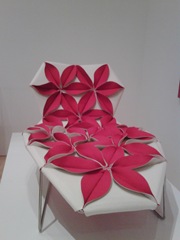 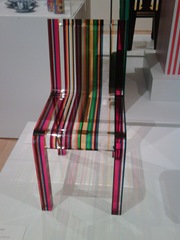 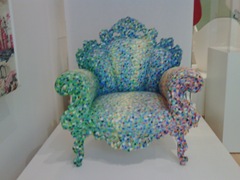 In this exhibit there were also fabrics, but the way they were displayed made taking pictures pretty impractical. The description of one of the pieces of fabric stated that the designer used the punch cards from Jacquard machines for the fabric design.

An Enduring Motif: The Pomegranate in Textiles

These aren’t great pictures, but the exhibit was about the pomegranate in textiles. These are ikat pieces. 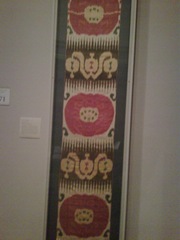 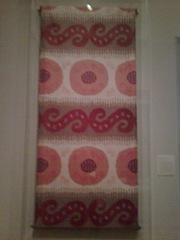 The Last Day was a little disappointing. The plan was to take the ferry across the Delaware River to New Jersey and go to Adventure Aquarium.  We were told that the ferry leaves from Penn’s Landing on the hour and returns on the half hour. We went to the ticket booth to buy tickets, but it was closed. The ferry appeared to be on the other side of the river. When the Maritime Museum opened, I went in and asked about when ferry tickets would be available. I was told that the ferry only ran on Saturday and Sunday. No sign was posted on the ticket booth. Many folks with children came by to purchase tickets, but of course were disappointed. I looked online at the River Link website, and there is nothing posted there about running only on weekends. We elected to not drive over the bridge to the aquarium and went to the museum instead. Later we took the bus to Rittenhouse Square where an art show was going on. 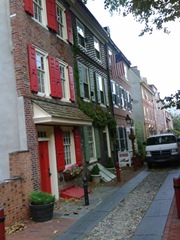 We also went to Elfreth’s Alley which is the oldest residential area in the country. If you look at the website, there’s a picture of this quaint alley in snowfall.