Today I made a trip to Love Field in Dallas, so decided to visit a couple of other places while there.  Why waste the drive, right?  I knew I wouldn’t be able to make myself stay in Dallas very long, as the traffic and numbers of people begin to wear on me.  So, since Benno’s Buttons and Trims is fairly close to the airport, that was one of my stops.  However, the nerve of them!  They’ve moved locations since I last visited their store.  But, thank goodness for cell phones and GPS devices.  I looked them up on my “smart” phone, called the number listed, and got the new address.  Then I plugged that new address into the GPS, and off I went.  As luck would have it, however, there was road construction in front of the store, so leaving the parking lot was a lot of fun.  I turned in the opposite direction of the line of cars that was not moving, to the tune of “recalculating, recalculating” and avoided the major freeway, and actually returned home by way of a better route. 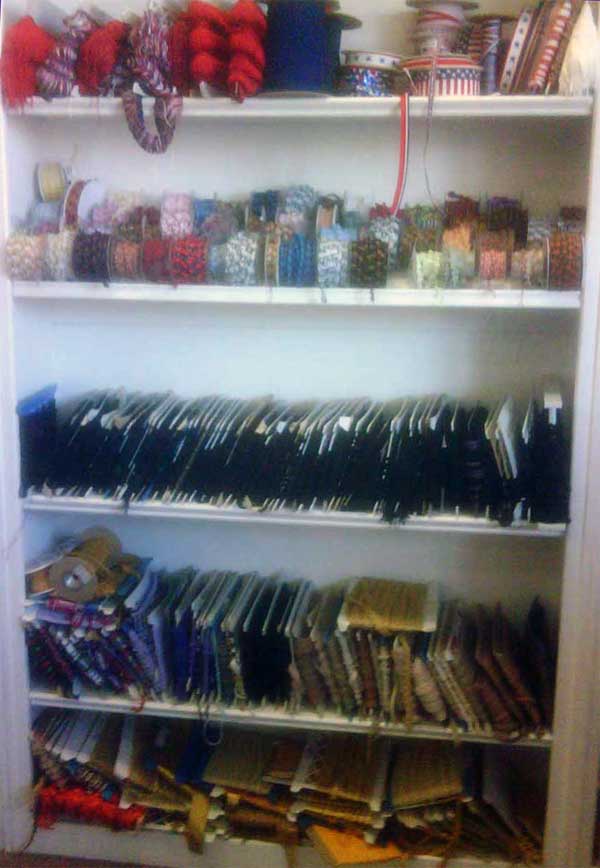 I discovered Benno’s several years ago when I was trying to find silk ribbon.  They still have a small selection of silk ribbons, but they really excel in buttons.

The picture on the right shows just one wall of buttons.  Since the pictures were taken surreptitiously with my phone, the quality is not great.

When I have to go back to Love Field for the return flight, I am thinking of leaving a little early and making a trip to Kay Fabrics. ( They have since been permanently closed.) They don’t have much of a website, but the store itself has EVERYTHING!  You can actually still find real fabrics made of real fibers that come from natural sources.  They are also the only place even close to locally that has Ultrasuede (I know—it’s manmade).  Silks, wools, cottons, you name it, all seasons, all the time.