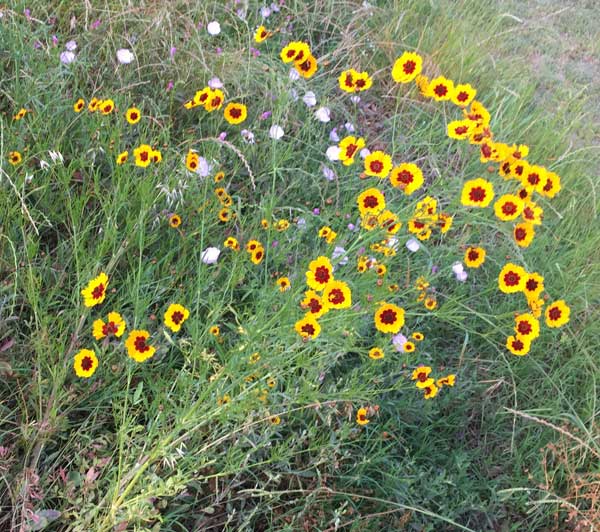 I hate to even say this out loud, so to speak, but I’ve started doing some walking–don’t want to jinx it. Many years ago, I walked 5 miles a day, and it was wonderful. All kinds of inspiration and problem solving happened during those walks. I have used the excuse that my knee hurts not to walk, but after the trip to London, where we walked for miles and went up and down stairs in the Underground, that can’t be an excuse anymore. Now, it’s time to increase distance.

Stops for snapping pics with my phone is also happening. These street repairs always fascinate me. Surely I can figure out some way to use those. Street writing. The coreopsis above are one of my favorite wildflowers. Of course, the fact that these have yellow and red might be a factor. The balled up yarns from last week? 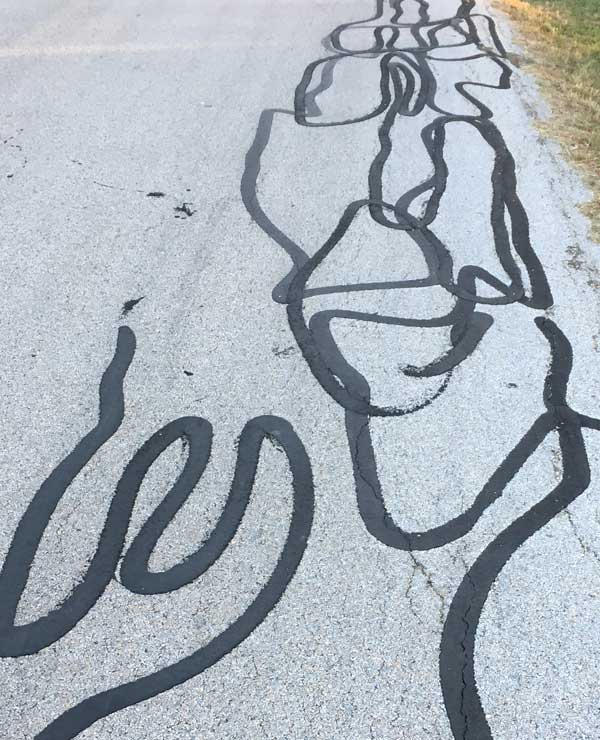 Back to the weaving

I’m trying to finish up the piece on the loom by the end of the month, and I’m ahead of schedule. However, I still haven’t dyed the yarn for next month’s project. That has to get done this week.

The beginning of this piece was posted last week, and here’s another part. 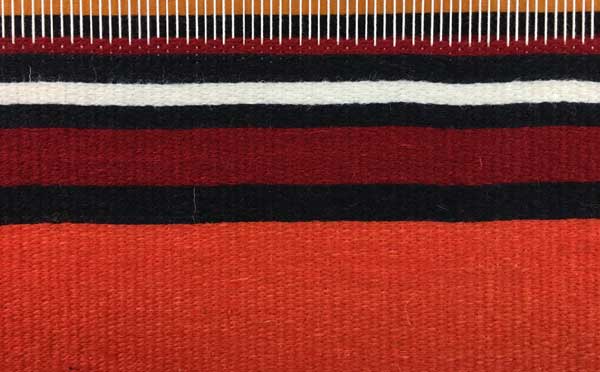 With all the color changes, there are ends to weave in. I prefer to do them while on the loom. 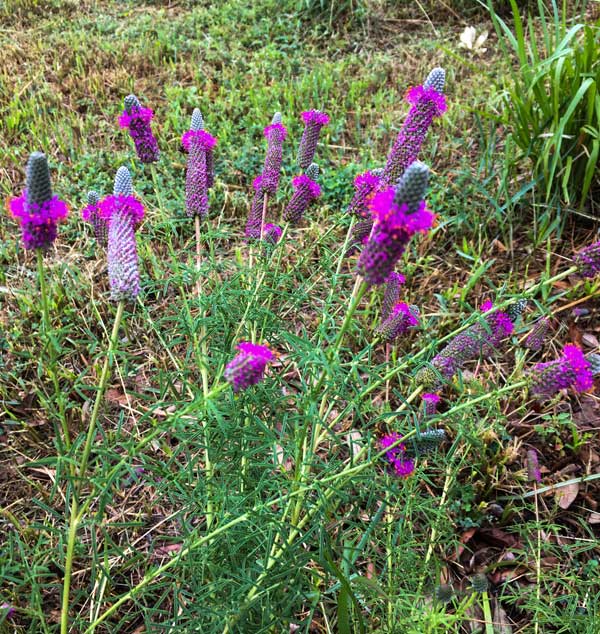 These beauties are at the Fort Worth Botanical Gardens and Botanical Research Institute of Texas. The beds may be shared by the two organization, but I’m not sure. BRIT has a prairie planted on one side of its building, and these are native plants. 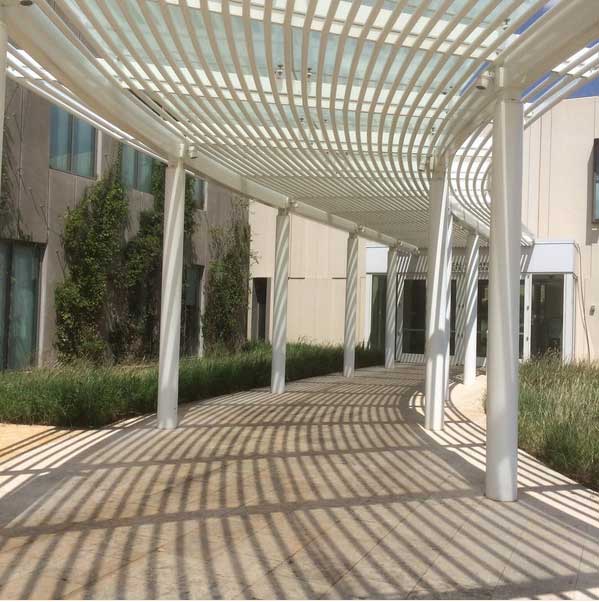 Walkway into BRIT. I love shadows!

It seems that there’s not much getting done around here, but when I look back, I realize that’s not true. September 12 was Fall Gallery Night, so there was work to be done there. Fort Worth Weavers Guild had their biennial show at CAC, so that had to be hung. The Fort Worth Art Collective had a pop-up at BRIT, so work had to be delivered and then picked up at the end of gallery night. Plus, there’s weaving to be done, and somehow, real life gets in there too.

The grounds at BRIT (Botanical Research Institute of Texas) are covered in native plants. Above is American Beautyberry. It’s so pretty this time of year. So, as I walked in, not only were the shadows from the walkway beautiful, but so were the plants. The grasses are in full seed-head mode. Too bad it’s hard to get good pictures of them with a phone. But the shadows–look at the ones on the pillars of the entrance, which I didn’t even notice until I saw the picture I had taken. The ones on the walkway were sufficient for my eyes. BRIT is located near the Fort Worth Botanic Gardens, so as I was leaving, I had to take a picture of the plants at their entrance. I have no idea what they are, but I suspect some kind of lily. Is this the year I finally join one of the many garden clubs that meet there? Plus, I’ve been mulling over how to hang a couple of pieces that are horizontal. My first plan didn’t work. More on that later too. 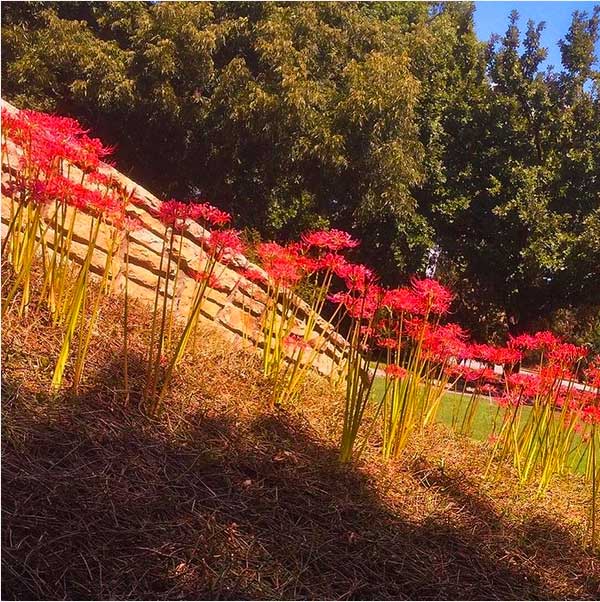 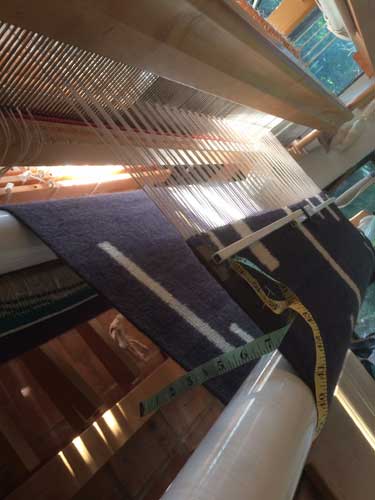 So here’s where I start for the day. I’ve been trying to get 10 inches woven per day. Sounds like a puny goal, doesn’t it? Even though this ikat weaves much faster than tapestry, it’s not like just throwing a shuttle back and forth. Each of the design motifs has to match up before beating. With ikat, a new motif pops up, and it has to begin in a place that will maintain selvedges. Sometimes, sections have to be rewoven just to maintain those selvedges. At first, as I was weaving, I kept notes on the measurements and compared them with the cartoon measurements, hoping to find some sort of formula to use in planning future projects. Maybe a mathematician could do it, but so far I can’t. My next project, to finish off this warp, will be purely experimental ikat. More about that later. And speaking of warp, I’ve got some ideas about warping going around in my head. I need to take some pictures and get opinions from you. Will it work or not? That’s for later too. Right now, I need to finish what’s on the loom.

What’s going on in your world. Weaving? Personal projects?