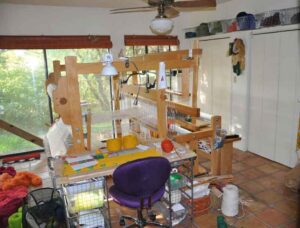 Loom with baskets to hold yarn on wall.

Yarn, yarn everywhere. The baskets holding yarn are the baskets used at swimming pools to hold your belongings while you’re swimming. The only thing I’ve bought on eBay. Below is the loom facing a different direction, moved with the help of super sliders. Notice all the lights. Still necessary. 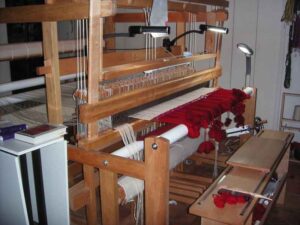 I tried wrapping in muslin for a while. 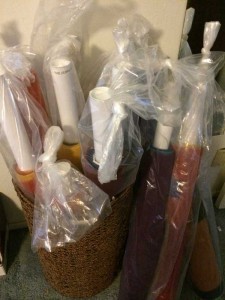 This is how they are wrapped now. 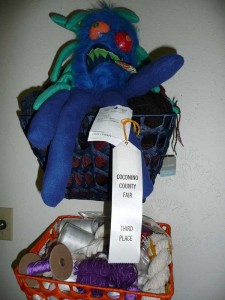 Yarn guardian made by my son.

Watching the birds out the studio window is one of my favorite things to do.  Before this room became my fulltime studio, there was a couch on which I spent many hours reading and identifying the various birds that came by to visit for a while.  My bird book was ever handy, as were the binoculars.  Some birds visited just for the day, or so it seemed, while others stayed around for weeks or months.  Cardinals seem to be fewer this year, and so far not a single red finch has shown himself, but there are plenty of goldfinches.  In another month, they will be bright yellow while gobbling up their thistle seed.

I’m having a really hard time with finishing the current project.  I think it’s been on the loom way too long and I’ve become bored with it.  The plan was to make another similar piece after finishing this one in order to take advantage of the measurements I’ve already made and the width of the warp.  However, I’m not sure my boredom threshold will hold up to that.  Maybe I just need a really, really engrossing audible book?  The yarns are dyed and everything is ready for the next piece—everything, that is, except my mind.  Or maybe I should start tying the yarns for a new ikat project.  I’ve been thinking of experimenting with doing an ikat piece that will require tying, dyeing, untying, and dyeing again.  Hmmm….  This all may be related to the lack of focus that I’ve had since the emotional turmoil of the past month—Okay, enough whining!  If all goes as planned, this piece should be finished today, and, instead of cutting off, I will continue on to the next piece.

This evening will be dedicated to doing some creative exercises of some sort.  Gotta get those juices flowing again!

In the meantime, I found a couple of interesting artists while poking around: Susan Hersey and Cathy Wayne.