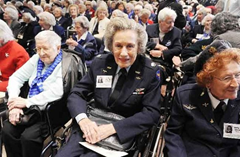 Female aviators of WWII honored with Congressional Gold Medal I don’t usually get too worked up about things like this, but I read the article in my local paper this morning, and thought it was worth reading more. The slideshow pictures here are really great. The pictures here come from the local newspaper, the Star-Telegram. 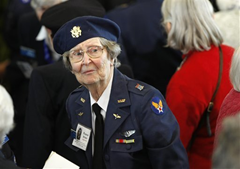 Below is a quote from the article. The red text is my addition. Even if the WASP documents were sealed, they have been in the general history knowledge-base of our country, so how the Air Force could say they were the first women to fly military aircraft is beyond me.

When the women were dismissed from service in 1944, their records were classified and sealed — denying them recognition for their accomplishments — in what many thought was an effort to obliterate them from history. It wasn’t until the 1970s that their story re-emerged, when the Air Force announced in 1976 that the women who were graduating from the first co-ed class at the U.S. Air Force Academy would be the first American women to fly military aircraft.

Okay, that’s my rant for the day. It’s another beautiful day in the neighborhood here. It’s amazing how energizing the sunshine is to me. After getting up at 4:30 am yesterday, I worked on taxes instead of succumbing to a nap. The plan today is to do some weaving and maybe a little garden work. I have some lantanas and Russian sage (both of those plants seem to take over their areas) that are going to get transplanted into the “hotter than hell” portion of what I euphemistically call my yard. Then I will also plant some gourds and watermelon there. It will definitely be the survival of the fittest!