The next piece has been decided, yarns chosen, and warp tied. In fact the first couple of inches have been woven. After the first section, will be two broad (9-inch) stripes of some sort of blues. I finally decided that they are in the turquoise category and planned what to dye. 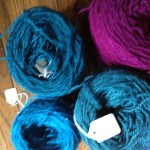 One of the stripes will be a darker, turquoise-y color as in the top left in the picture. I want the other color to be lighter. On the bottom left is a color that appears lighter, but also may be too blue to suit me. It’s dyed with a 50/50 combination of turquoise and blue, so I decided to up the turquoise and dye a 60/40 combination. The darker turquoise has a bit of black in it, so I’ve got another pot going with that combination of colors in the same proportions, but instead of a 1% dye, I’m going with 1/2 of that. In decimal land, a place where I pretty much remain a stranger in a strange land, that would be 0.005 instead of 0.01–I think. At least it will be easy to over dye the experiment if needed. Oh, and that other ball of yarn on the lower right–it was dyed just like the top left one, but in a different pot. That’s what they mean when “they” say make sure you get enough yarn in the same dye lot.