Okay, I admit it.  Doing this post is just avoidance.  Don’t want to do the other stuff that really MUST get done.  However, I am dyeing even as I sit here at my computer, so all is not lost.  Just out of curiosity (and avoidance), I scanned in the yarns that I am currently using because I wanted to see how well the colors via scanner/computer compared to real life. 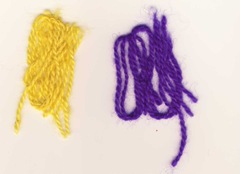 They actually look pretty accurate.  That means that if I had a drawing of a design and wanted to plug in the actual yarn colors—well, it’s a possibility.

The Sun Yellow on the left is the one that I don’t have enough of so am dyeing another skein.  I can start blending yarns from the 2 dye lots at some point so that it will looked planned.  Between running out and checking on the dyeing, I am doing dishes, laundry, vacuuming, mopping, etc.  And then there’s the issue of the clutter, which just may have to go into a box for a few days for sorting later.  We always go for coffee late on Sundays, so I’m thinking a trip to the Y is in order before the coffee break.  That means everything has to stop around 3-ish.  I have to allow plenty of time for the workout as it’s still all very new to me.