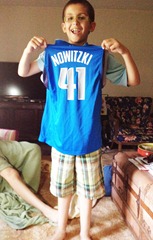 One of the first things I found out after Zane arrived—he wanted a Dallas Mavericks jersey. He would be spending ALL of his money to buy this shirt. And this is from a little boy that does not spend his money freely. Don’t ask—I have no understanding of this desire, except that both boys play b-ball and really like it. He said that he feels so good in this shirt! 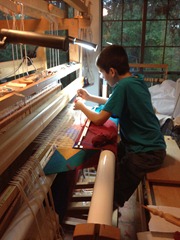 Beck tried out the loom and wants more. He also enjoys taking my leftover butterflies, knotting them together, and making a ball of yarn using the ball winder. He’s probably the only one that can reach the treadles on this loom. 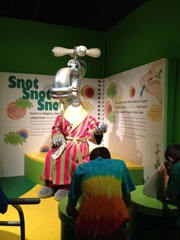 The nasal mucous explanation by the runny faucet.
You’ll be spared from seeing the actual “mucous.”

We also went to the Grossology (picture above) exhibit at the Museum of Science and History, which of course, is rated …. 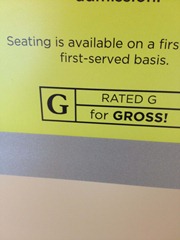