I cut off the swirly piece yesterday. I think I like it, although the bottom sections with the blues to purples don’t show up very well in the light where I put it down. I plan to put it in another room and take a picture later day. This is also the day to clean up the studio, all the fuzz, bits of yarn, re-ball the yarns and store them in some organized (???) fashion. Then I have the pleasure of warping the loom. Before I can do that, though, I have to put the new counter on the AVL wheel. After all, that is the whole reason for using the wheel for me. My mind goes walkabout when winding on 30 yards or more of yarn, and I lose count.

I’ve also got to decide what to weave next. I’ve been thinking about a tail to tail or nose to nose Señor Fish, 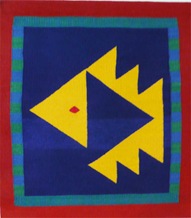 or something similar to Sine Wave, except in reds. I like the optical illusion of curves that can be created with straight lines. But I’d also like to experiment with weaving two narrow pieces side by side at the same time. Could my poor brain handle that?