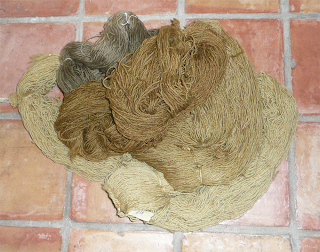 I made up some 1% solution for the three colors I’m going to try this go-round. I usually dye with the powders, but some of my numbers were coming up in the hundredths of a gram. Even the triple beam won’t do that! I like 2 out of the 5 colors I’m working on.

The theater decided it needed to repaint the wall where my pieces will hang rather than repair it. And, no, they are not changing the color. A short reprieve from that chore/pleasure. I’m thinking of using the method of a friend and lashing a stainless steel rod about an inch from the top of the piece, and hanging with the rod. Guess I should experiment with that.

Here’s a blog that I find both amusing and interesting: http://margaretandhelen.wordpress.com/.
Beware that some people may be offended by the political stance, but I think her January 20 post is right on. But, again, I don’t know why we can’t have different opinions and still be friends. I generally avoid political and religious discussions because there’s so little point. No one’s opinion is going to be changed, and folks just get over excited.