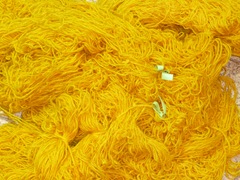 The dye used is Pro Sabraset/Lanaset from ProChem. The color is Mustard, which has been a very useful color for me, even with the unfortunate color name. The Sun Yellow is a much clearer color. The greenish tags are the same ones that they use on plants. I write the weight of the yarn and the dye formula—100% Mustard or 50 Mustard 50 Scarlet—whatever the case may be. When they are balled up, the formula is written on a string hangtag and attached to the yarn, so that when there are bits and pieces left, I will know the formula for dyeing more.

A couple of months ago, I came to the bottom of one of the huge containers of yarn. I weighed and labeled what I needed for the current project, then did the same for the other skeins, which I left in a basket. I am so glad those skeins were ready and waiting today. All I had to do was wash them, use my spreadsheet to know the amounts of dyestuffs to add to the pots, and I was good to go. Since I use two wefts in my weaving, I nearly always dye in twos. Yesterday, I picked up two skeins which weighed 240 grams and two skeins weighed 239 grams. How lucky is that! Since I use two dyepots, I mixed up the numbers so that, theoretically at least, each dye run will be equal. I learned the hard way to mix the yarns from the two pots, even if they are the same color. If I don’t, there will be a barely discernable line running across the weaving when you start the second color run.