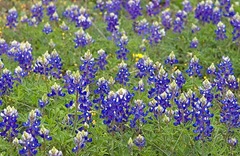 We left Friday morning for a little drive to San Antonio. That’s about 5 hours from the Fort Worth area. We used the GPS, but rejected I-35 for a more scenic route. Unknowingly, we had the parameters on the GPS set to avoid traffic, which means we went on backroads of Texas that weren’t even on our paper map. Because of the drought, our bluebonnets are not as plentiful this year as usual, but they are still thrilling to see. We Texans love our bluebonnets! Somehow when we see the bluebonnets in bloom, all’s right with the world. In good years, the flowers would cover the hills and everything would look blue during the peak season. This year the flowers are clustered in areas where more moisture would have collected.

The Contemporary Handweavers of Texas biannual conference was up and running when we got to SA. I tried out my new phone camera and used my regular camera to take a few pictures. 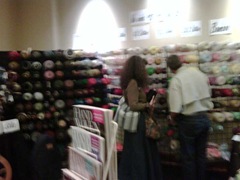 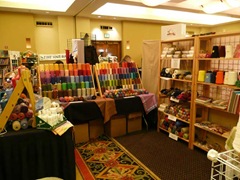 The one on the bottom is of Lone Star Loom Room’s booth, taken with the camera. The one on top was taken with the phone, which I have trouble holding still, for some reason. That’s a snap of Heritage Art’s booth.

Linda Ligon, of Handwoven magazine fame, was the keynote speaker and the judge of members’

I am happy to say that Sine Wave won second place in the Art Concept category.

Friday night we drove downtown (I was reminded again of why I don’t like big cities-freeways!) to the mercado area for dinner at Mi Tierra. Mi Tierra is a Mexican restaurant that has been in business for over 60 years. As you walk in, there is a huge altar of the kind that is usually only seen for El Día de los Muertos. The ceiling of the restaurant were decorated with metallic papeles picados and metallic piñatas. 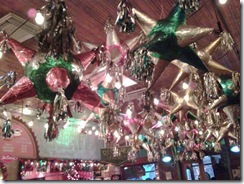 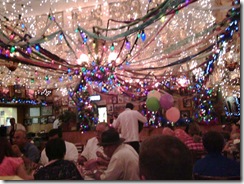 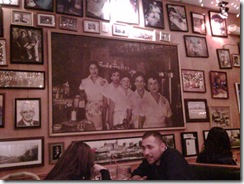 Mi Tierra is also a bakery and has typical Mexican pastries. And there are pic 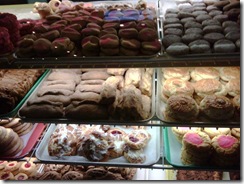 On the way home we stopped in a little town called Blanco. In 2000, the population was around 1500. It’s in a popular area of Texas, so I’m sure the population is larger now, but not by too much. So, imagine our surprise to see 20 or more Ferarris 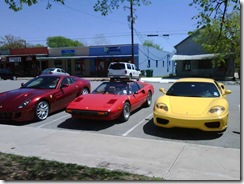