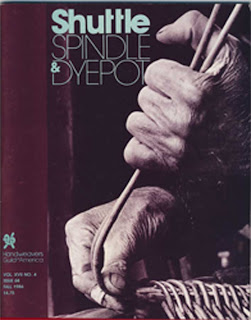 In the fall, 1986 Shuttle, Spindle & Dyepot, there is an article called A Journey in Progress by Annie Curtis Chittenden. The article follows Ms. Chittenden’s work as it progresses through various styles of weaving, from tapestry to Theo Morman technique. One of the ideas that interested me was her method of designing. After making small sketches, she used an opaque projector to see the design on the wall in various sizes. Choosing the size that seemed to work best for a particular design, she then traces over it for use as a cartoon. 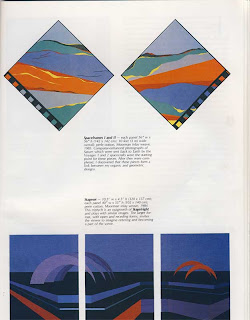 She also uses the original small sketch by placing tracing paper over it and experimenting with color. This is something that I now do with the computer.

I have tried to find information about Ms. Chittenden, but could only find a reference of her tapestries (no pictures) hanging in Mackenzie Dining Hall in Connecticut. I am really enjoying reading the articles in these old magazines, but would love to find current information on the people mentioned in them.

Both of the pictures here are scanned from the Fall 1986 issue of SS&D.

Gardening Last week, when it seemed that spring might actually occur again, I ordered some galvanized metal walls for a raised garden bed. I expect to grow at least a few vegetables this year, although the weather yesterday and today totally belies the whole idea of spring. Black-eyed peas will one of the plants that will be planting. I miss fresh black-eyed peas cooked with snaps. Sometimes fresh peas can be found at farmers’ markets, but not with the sizes needed for snaps. February is around the corner, so March can’t be far behind!

Books While weaving, the book on the iPod is The Swan Thieves, which I got from audible.com. It’s the unabridged version, which makes it 18 hours of listening. The verdict is still out on this one for now, even though I’ve finished the first 12 hours. The pace of the plot does seem to be picking up a bit. As quoted from the NYTimes.

THE SWAN THIEVES By Elizabeth Kostova. 564 pages. Little, Brown & Company. $26.99. Elizabeth Kostova’s first novel, “The Historian,” was the subject of a heated publishing industry auction and went on to spend nearly 20 weeks on The New York Times’s best-seller list. Now she is back with her second novel, which buyers at both Barnes & Noble and Borders put near the top of their lists of hotly anticipated books for 2010. The plot follows the obsessive search by Andrew Marlow, a psychiatrist, to unravel the mystery of a patient who defaces a painting at the National Gallery. The point of view shifts among narrators, and the book goes back in time to the 19th century to explore the lives of the painters Béatrice de Clerval and her uncle, Olivier Vignot, who form a large part of the story. Writing in Publishers Weekly, Katharine Weber said: “Legions of fans of the first book have been waiting impatiently, or perhaps even obsessively, for this novel. ‘The Swan Thieves’ succeeds both in its echoes of ‘The Historian’ and as it maps new territory for this canny and successful writer.” (Publication date: Jan. 12.)