I took the piece below to get it photographed by David Wharton. Amazingly, when we took the camera card to the computer, he had pictures of the guild show on the screen. He was kind enough to also give me copies of those photographs.  So, there’s a twofer today.

With this piece, I had a basic idea of what I wanted to do, so I cut out shapes from colored paper, stuck them on graph paper, scanned them and played around with color.  I’m still undecided about the orientation of this piece. Thinking about it …

These are pictures that David took while at the center to photograph an installation by another artist. On the right in the picture below is the raffle piece and the door that leads into another room of weavings. He didn’t notice that the show continued into those rooms, so there are no pictures of them. 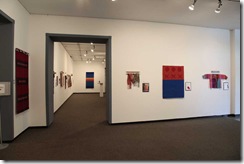 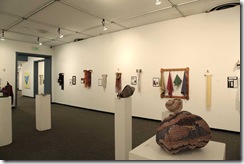 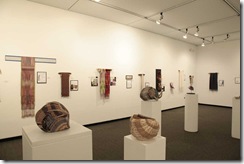 I have almost finished the ikat part of the current piece and will need to get the dyeing done for the rest of the piece. That will have to wait until tomorrow since I need to get propane.