I read the post below from artist Aaron Kramer’s Facebook page, shown below. If you can’t read it, go to his FB page and find the post. It’s all about using Pinterest with respect—respect for the artists or whoever originally created the pinned picture. You can get a “button” for your blog or website like the one above. By the way, Aaron is the juror for the HGA Latitudes exhibit to be shown at Convergence. His website is here. 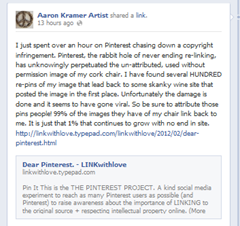 And then there’s this quote taken from a Business Insider article about a woman named Kirsten, who is a lawyer and a photographer.

Kirsten likens Pinterest to Napster as an enabler of illegal activity.  It wasn’t just Napster that went down — 12 year old girls who downloaded music were sued too.

In other news, this organizing stuff causes more disorganization! I haven’t gotten done what I was supposed to get done in the last couple of weeks. I’ve been in a bit of a funk, understandable once I realized the date. So now, it’s back to getting busy and going through those !?/#**#**! files! Sort, sort, sort!