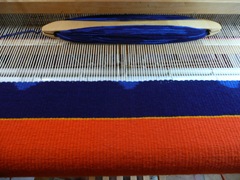 I have missed my loom. Much time has been spent on other things lately. One of those “things” involved preparing ikat. As I have said before, with ikat the prep goes into the front end and the weaving goes faster than with tapestry. Then, after tying the warp to the front, I realized that there’s really not much warp left of that 33 yard warp that I had put on previously. I took one of the extra warp threads that was hanging past the width of the current piece and unwound it from the warp beam. Hmmm…only 4 yards. Guess this will be last piece until I re-warp! I also made a few adjustments to the design, just in case I made another miscalculation. I thought I was very carefully entering in the amount of warp used, but evidently that didn’t happen every single time I completed a project. As the say, live and learn. I may put on a warp piece by piece until I decide for sure what I want to do about warping. I have been using a 4-ply smooth wool warp that I like, but it limits me to 4 epi. I have been considering using a 9-ply Swedish cotton warp set a little closer, but that may mean a change of weft. Always decisions!

In the picture above you can see what’s on the loom. I wanted these ikat ovals to have contrast, but not too much. As I weave, I can see how this is a possible problem. It’s hard to keep up with where the design is. I overdyed the red sections again because there was more contrast than I wanted. Will that now be a problem in weaving? Stay tuned. 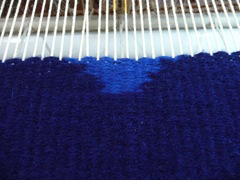 At Convergence I took an all day workshop presented by Gregory Case. This is going to seem so dumb, but I found out on my little point and shoot camera that there is a place to change the exposure! Duh! So, while I plan to get a new and better camera soon, I am playing with exposure. That little graph-looking thing—well, you can look at that and know whether to adjust the exposure or not. A couple of other things about taking pictures are the issues with color and color calibration of the monitor. More on that later, but we all know how important color is to us!