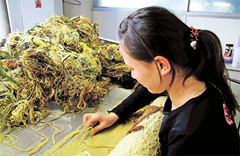 This article about tapestry weaving in China was posted in ShanghaiDaily.com and comes via weavespindye@twitter. In this picture, I immediately noticed the pile of yarns.

A tapestry work hung in the Shanghai Hall of Beijing’s Great Hall of the People. 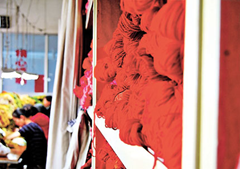 Old weavers in Yangjing Community today still dye the wool themselves. There are more than 400 kinds of reds.

We took a short road trip to Comanche, Texas yesterday. It’s a fairly old town. and the drive is nice, through some pretty countryside. One of the town’s claims to fame is the fact that John Wesley Hardin, the old west gunfighter, shot and killed a deputy sheriff there in 1874. Until recently, the saloon where the shooting took place was still in business and (I have heard) was the oldest still-in-business saloon in the state. If you read the Wikipedia piece about Hardin, it’s hard to tell the good guys from the bad guys in the wild west days! It’s also interesting that, after prison time, Hardin went on to become a lawyer. As I think about it, maybe it’s still hard to tell the good guys from the bad guys; only the weapons have changed.

While walking around the square in Comanche, I came across this sign in a window. 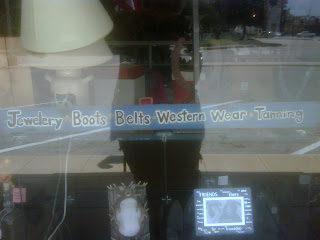 Love the juxtaposition of available items! But it did make me wonder: Are we talking about tanning of leather goods or human skin? Or is it one and the same?

Summertime temperatures have arrived here. Rainfall was good in April, but now we’re behind for May by 4 inches, a considerable amount. Off to water the vegetable garden and warm up the loom bench. Still listening to Shanghai Girls and finding it very interesting.