Sometimes the weaving needs a cartoon, sometimes not. On strictly geometric pieces, I usually draw to scale on graph paper and just weave away based on my drawing. With ikat I always need a cartoon to put under the measured yarn as a guide for the ties. This upcoming tapestry needs a cartoon, which leads me to this saga of getting enlargements. The closest place for me to get these made is a FedEx store. When I first started getting these enlargements done, they had a young woman who was very talented in this area, and they came out exactly right every time. I really hated it if I went in there and my favorite person wasn’t. Sometimes, I’ve actually gotten home and found that the enlargement was as much as 6 inches off! Now I carry a tape measure and they probably hate for me to come in.

Friday I went to a different store. After waiting through several unsuccessful attempts, during which the employees spent their time laughing and telling jokes, perhaps flirting, I said thank you for your time, but I’m leaving. 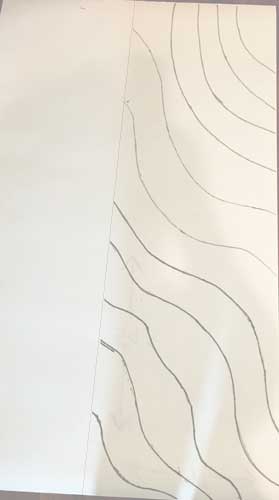 cartoon on the floor

So on Saturday, I tried my usual store. The young lady had the correct measurements in the computer, and it seemed that it should come out correctly, but it didn’t. One of the other employees suggested putting the file on a flash drive and taking that directly to the printer. Glory hallelujah! It worked. Even better, this means I can put my drawing on a flash drive, take it directly to the printer myself and print it out. I don’t have to take in a small drawing that they scan and enlarge manually. The file that I put on the flash drive can be the actual dimensions that I want the final cartoon to be! I can’t tell you how excited this makes me! Trying to not think about the fact that I haven’t actually tried this yet.

2 thoughts on “The saga of cartoon-making”