…besides the psychological ones.

Monday-I finished the twisted warp section. I had twisted it two more time, but then decided that was too much, so I unwove the top section and redid it with less twist. After cutting it off, I think that at least one more twist would have been better. What do you think? It’s an interesting idea, though, and I’m glad I did it. 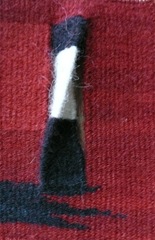 The good news is that I had nice straight selvedges! I was expecting more draw-in, but it didn’t happen. Some of the issues that came up while weaving:

Taking those things into consideration, maybe the next project will be more pictorial, although I have other ideas for some shaped tapestry pieces.

Next up—warping again. Maybe I’ll do it right this time! I’ve scanned a couple of drawings and experimented with color. That means using a cartoon, another something new for me on this loom.

Later Monday—Just tied more heddles. Going to try for the entire width of the loom (12 inch weaving width) at 6 epi this time. It’s really nice to be able to experiment like this. And I did put a drop of glue on the heddle knots. Now if I can just figure out a better way to keep up with the warp thread as I warp.

Oh, and by the way, I’ve decided that I really don’t want to do a three hour seminar about tapestry with no looms.