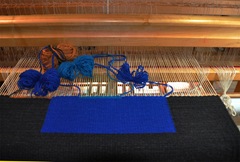 In preparation for a commission that I have coming up and another project which will be explained later, I finally got the new warp on the back beam

and tied to the dangly threads of the old warp, tied onto the front, and started weaving. I have used the Swedish cotton for this warp, ends doubled, and so far, I like it.

I took both these pictures with my new camera and am wondering why I seem to have a curve where there should be straight lines. Well, actually, I don’t want to know WHY, I just want to know how to not have them. The why is best left to another day.

The commission pieces will be a series of squares, which I have done before, so the challenge was to change them up a bit and to use different colors. While working on that, and because I needed something in progress on the loom, I started the charcoal, blue, teal, and cinnamon project. Here is the drawing for the project photographed above. There are obvious differences in the colors, but you get the picture. I may expand this idea and reverse the colors in some ways and weave another similar piece. 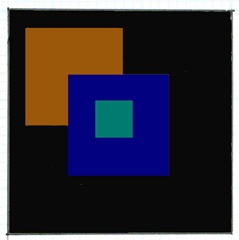 I made eight or so square drawings to scale on graph paper, scanned them, then played around with color based on the color wheel in Color Schemer. I have mentioned how much I like this program in other posts.

It is so nice to be back at the loom! I love my job!