Even though I’m definitely not a shiny-type person, I decided to experiment with metallic yarn, since I’ve never used them before. 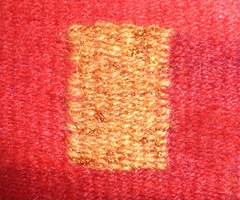 I only have this one little square, because I have to warp my loom yet again. Even though I thought I was following directions, I can’t seem to move the woven portion of the warp down so that I can weave more above it. Maybe if I warp this loom enough times, I’ll get the hang of it! I was thinking that I would use metallics on this pulled-warp cube, along with some silks and other shiny yarns. 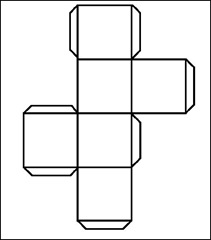 I’m sure this will come as no surprise to most of you, but metallic yarn is stiff. And, since I mixed it with the single strand of wool that I was using, some build-up issues happened. But I will forge ahead with shiny things—after I get a warp that works!

This is a video that Christina Neit of Good Quill Hunting made of warping her Mirrix. Below the video are written instructions from the Mirrix website. I was having a hard time reconciling to two. In the video, Christina makes a complete circle around the warp bar and goes back to the top where the coil is. I asked the Mirrix guru, Claudia Chase, about the differences in the two warping methods. What she tells me is that the method shown in the video is not as stable for tapestry as are the written instructions. 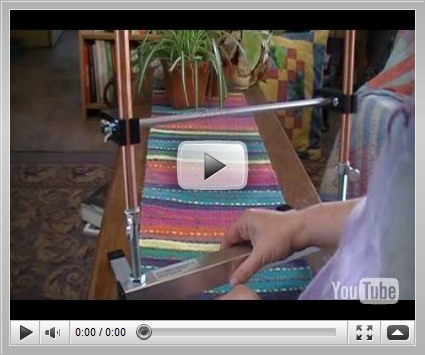 Here are the paper instructions that came with the loom:

I have realized after comparing the written instructions that I received with the loom and the above instructions from the website, that there are some discrepancies. That one word, front, is very helpful and is missing from the paper instructions.

Claudia also suggested that I must be crossing my warp threads to cause the problem of the warp bar not moving. Well, guess what? That’s exactly what I’m doing! Here is a picture of my warp ends. I’ve labeled the first picture. At the top is the warp bar, at the bottom is the bottom bar of the loom. 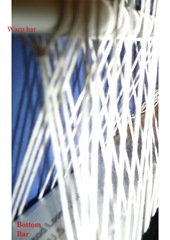 This is the way it SHOULD be done. I know you can’t tell much, so let me just say that the warp bar has been pushed down to the bottom of the loom. That means it works! Yippee! The warp is wide and it was difficult to get a location to take a picture. Plus, the light had totally changed from early afternoon to night by the time I got here. 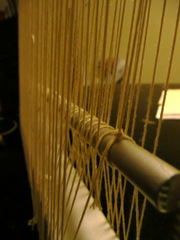 I now have a warp on the loom, and even though it has several knots, it moves. I don’t remember where I read it, but I think you can tie new warp onto the warp bar when necessary. But I’ve been having so much trouble, that I just knotted my warp ends together. I’ve been desperate to get a warp on. Below is what I’m using as a spool for my warp thread. It’s an old, empty Gutterman spool that has just enough of an edge at each end to hold the warp. 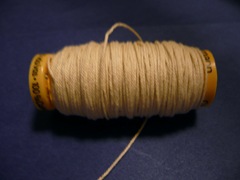 2 thoughts on “A walk on the gaudy side”