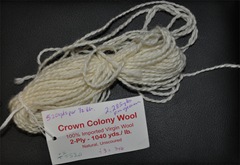 It is time to buy yarn again, so I placed an order with Henry’s Attic last Wednesday. I think this company is probably the only company on the planet that doesn’t have a “real’ website, but I love their yarns.

I placed an order for 110 pounds, 10 pounds of which is for a friend. One hundred pounds of yarn is a lot of yarn. It arrives in a box that is really big and awkward to carry, so I leave it on the porch and divvy out the yarn to its various storage places. The last time I bought yarn (in July, 2008), all of it wouldn’t fit in the usual places, so I put some in the antique blanket chest, then put a reminder on my computer calendar about its location. When the reminder popped up, I couldn’t remember whether I’d already accessed that yarn or not, so off came everything on top of the chest. Lucky me! It was still there, so I was set for more weaving. Currently, I have been weaving up bits of yarn from different sources that are in the storage containers, so I’m pretty sure there will be enough storage in the closets. Although, the previous order was for 91 pounds, not 100 as is this one.

When I first started buying Crown Colony, I just assumed that all the skeins weighed 1/2 pound, but then had problems with reliable color repetition. Out came the scales and the discover that there are big differences in the weight of each skein. But it’s still better than winding my own skeins.