An 1897 photograph of a buffalo wallow, underlain by the Ogallala Aquifer (Haskell County, Kansas)[1]

Slowly, very slowly, I can feel myself crawling out of the do-nothing wallow I’ve been in. My organizer called this decision fatigue. That sounds so much better than wallowing.

Yesterday was haircut day and a pedicure, my second ever. Pedicures could probably grow on me. 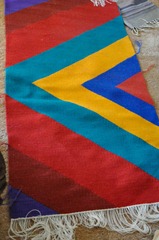 And—tah dah—I  actually tidied up the studio from the last project! That usually entails re-balling balls of yarn ‘cause they get so floppy from that center pull and putting them back on the shelf. I even looked at some ideas in my Design folder, mulling over what to weave next. One project that’s been rolling around in my head requires lots of different greens, so I got out the greens that I thought would work well together. Now I’ll see how to incorporate those into the piece. I know that some of these don’t look green. In person, they are more greenish. But as a bonus, my newly-manicured toe is visible! 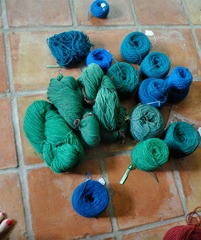 I’m also getting stuff together for my color consultation, happening later this afternoon. More about that later.