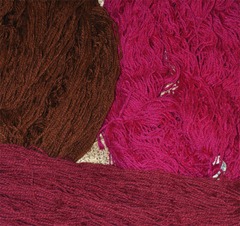 The dyeing has been going really well, even after a pretty big mistake resulting from my—ahem—math skills. I was going to dye the rust yarns at 1.5%, but somehow after adding in the weight of the weighing “container,” I added that amount to the amount of dye needed with a decimal misplaced. Now, logically, that should have been a red flag immediately, but, alas, it wasn’t. The result was that I added dye to the pot which would have resulted in rust skeins dyed at 2.35%—not exactly what I had in mind. So, I just added another skein to the mix, readjusted the dye amount, and went on my way.

I usually tag each skein with its weight in grams and the color formula used. Even after balling up the yarn, I either transfer that tag or write out a new one on a string tag, seen below. 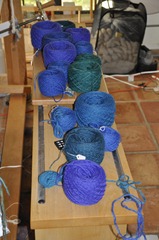 But, when that system fails, it’s nice to have a record of what you’ve done when you didn’t do the record-keeping like you usually do. (Talk about a convoluted sentence!) Since the rust didn’t turn out like I thought it would, I wondered if it was one of the colors that Polar Red had modified. A search on my blog turned up all the colors resulting from my experiments with this bright, bright color. Seen at the top is rust, polar red, and a 50/50 mix of those colors. Guess my latest rust turned out just fine after all! I’m taking a break from dyeing today to work on taxes, preparing the next batch of yarns for dyeing, and a couple of fun things. I think I’ll dye these “Matisse” colors shown here. 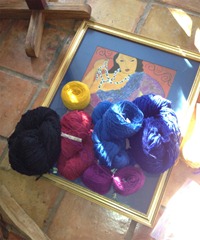