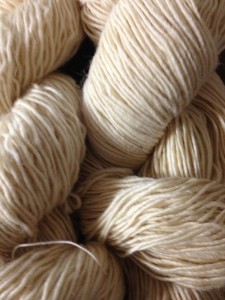 I went out to what I euphemistically call my dye studio the other day and saw a big mess. Two long shelves that held several boxes of yarn/weaving stuff had fallen to the floor. This was stuff that I didn’t want to get rid of, but also did not want it taking room up in the house. Way back from the days when I used to sew, there is a box of wool fabrics that I though I would cut up and over dye to have harmonious colors together. Like that was going to happen! There was also a box of yarns, which I opened, beautiful yarns ready to be dyed. I have a very, very dim remembrance of having those yarns spun at some time in the distant past. These yarns look exactly like what I’ve had in my head that I want to weave with now. I took a couple of them inside the house to find out how many yarns per pound they had. And I would have done that, except that my McMorran yarn balance has disappeared. Not wanting to waste anymore time looking for it, I balled up the yarn and then skeined it again, counting as I went along. Turns out that the yarn has about 825 ypp. Each skein weighs in at about 1/2 pound. Since I also really don’t like the warp I’m using, I will wait to use them after re-warping the loom with linen.

Now, what about the rest of that mess out there? A different kind of shelving is definitely a must. Really don’t want something else that will pull our of the wall.