Admittedly, I’m not a shopper and really don’t get out much. Last weekend I decided to drive to Kerrville before going on to Boerne, and Austin. Kerrville and Boerne (pronounced Burn-y) are in what we in Texas call the Hill Country. This is a really pretty part of Texas and is always a pleasure for me to travel there.

I had been to Kerrville once before and went to a fabric/quilting store there called Creations. Actually, I didn’t remember the name of the store, just a general idea of where it was located. What made it so memorable to me was the fact that it actually had “real” fabrics of wool, cotton, and silk. The store is located in an old house, and each of the rooms holds a different variety of items.

I bought a pattern for a purse which used something called Texture Magic. When I asked about this stuff, I was shown several items in the store that incorporated Texture Magic. Above is a pillow that has this magical material. I know you can’t see the texture in the picture, but it’s there. The pillow is made from a panel like the one below

The way this stuff works is to put it on the back of a piece of a fabric then stitch on a sewing machine in a design of your choosing. After stitching, hold a steam iron over the Texture Magic. It shrinks up, giving the puffy texture seen in the After picture below. Here’s the website with an explanation. So, back to my not getting out much—who knew there was such a thing as this out there? And take it from me, the flower pillow has really nifty texture. The stitching follows the lines of color with a special stitching effect in the center. 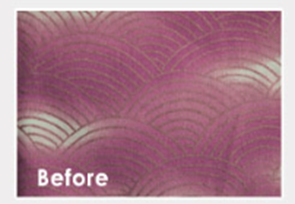 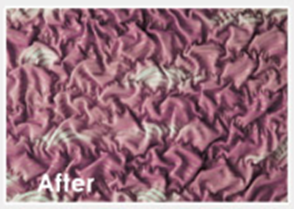 All over the store are attractive items made from the patterns and fabrics in the store. A few pictures below.