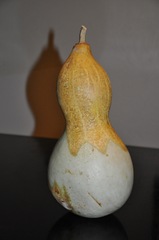 Some old gourd seeds were thrown out last spring, and they sprouted and grew—and grew and grew. This one was picked green, and it just sat there on the table for months. Then it started to dry out, working its way downward from the stem. Only an inch or so, then another inch, and so on. Once it reached the “neck” I would find a white mold around that narrow part, which I wiped off immediately. In the interest of science—heehee—I should have started timing the length of time this thing is taking to dry out. The ones left on the vine are dry and have been harvested. I love the color and the variations in the color, as it develops.

In a total change of subject ….

When this picture came up in my ArtDaily newsletter, I immediately thought of the recent local news about the Plano school district and its plan to ban a humanities book after one parent complaint. There was concern about the depiction of ancient nude statues and other artwork that contained nudity. I am happy to say that the school district reneged on that ban. Some of the artwork mentioned as being offensive I have seen in museums, not only locally, but in other parts of the world. But, I don’t know—these statues could be pretty titillating, right? By the way, as far as I know, the above picture is not included in the textbook in question.