At least that’s what I would have said on Thursday. Nothing to say…the same weaving is progressing in the same way, the weather is still cold, windy, and dreary. But today (Friday) we forced ourselves to go out in the cold, windy, dreary, and now rainy weather to have breakfast and go to the museum. We went to the Amon Carter Museum which I have mentioned before. I was thinking that a new exhibit was starting, because, if I’m out having fun, it must be Saturday. And Saturday is when the new exhibit opens. Not to worry…we got to see two great photography exhibits. The Carter has a huge collection of photography and always has some hanging, either from their collection or brought in from other places.

Every time I see these old photographs, I am amazed at how good they are, and, even more so when I think about the age of the photos.  This one probably won’t reproduce well here, but it’s very effective in person. 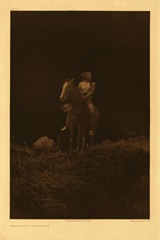 In keeping with weaving, I always notice patterns: 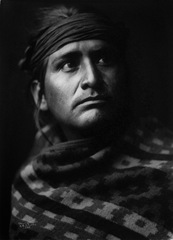 I always carry a small notebook in my purse to make note of things I find interesting or draw patterns that might be used in a weaving later. Of course, I have to remind myself to look at my notebook occasionally!

And then, there is this one of interest to all of us who weave: 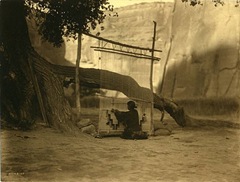