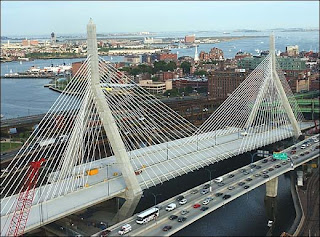 I’m sure I’ll pay for it next week, but yesterday I napped and read all day long. Intentionally! And enjoyed every minute of it. I used an excuse, of course. Still have a little bit of a cold. Hah! That Zicam stuff really works! The weather also contributed to my ennui–still cloudy and cold. I can blame it on any and everything, but I really did make a choice. So there!

Do you ever look at architectural lines and wonder about designs based on what you’re seeing? This is a bridge in Boston. I think I took this picture, but maybe not. It was in my design folder of pictures, drawings, etc. I know I took many pics from the subway trying to get a picture, but at this moment can’t remember if I succeeded or not, but I still love all the “lines.”

I received my American Tapestry Alliance newsletter Friday. The issue has several articles about creativity, which is interesting since I had just had a conversation about creativity with a friend. There are some very good ideas in the articles. Two of the articles were written by Pat Williams and Tommye Scanlin.

I’m also doing research on a new cell phone. I have a very old PDA that I love, but now don’t carry so much because

I would really like one of the smart phones. My current cell is going out, having a few problems. My carrier is ATT, so i looked the other night at their choices. They want to charge me a one-time fee of $18 to upgrade. Looks like they’d want to keep my business, right? On our trip through parts of South Dakota, Wyoming, and Montana, we had no coverage with ATT. Verizon has much more coverage in places where I might be soon, including where I live, so I’m going to see what their offerings are. I’ve considered a Blackberry, but from the user comments I’ve read, it’s somewhat difficult to sync your Outlook calendar/contacts. My aging PDA uses Windows Mobile, so syncing was easy, which is why I’m also going to look at a couple of Samsung phones. But now, it’s time to get going and to NOT be lazy today, even though it is still cloudy and cold….