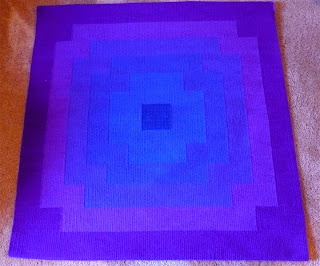 Okay, as usual, the picture isn’t great. This is the one that has just been cut off the loom. And, as usual, the colors are not quite right. Oh, well, I’ll try to get a “real” photo taken next week. But, you know, it is the holiday season and other things may have to take precedent. Like visiting with my son and daughter-in-law next week. They will be arriving on Monday, so maybe a little extra housework is in order. As I have been weaving I worried that the color gradations might be too subtle (and they are more subtle than this picture shows). But when I look at it laying on the floor, the gradations look good. I don’t have the final measurements yet, but the width is about 38.5 inches. If plans had worked as planned, it would be square, but I don’t think it is.

I am now going to clean the studio–good for the soul–and then tie on the warp again for the next project. If I have learned nothing else lately, it’s that tying on the warp immediately means that more weaving gets done.