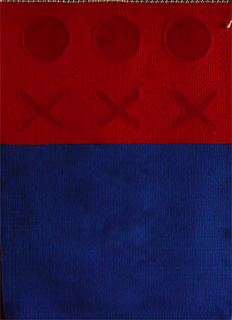 I added the piece on the left (in the top photo) yesterday. Since it’s shorter, it was easier to hang. I don’t have a good photo, but the one I took is the second photo. I have hard getting these pics to go where I want them to do. The picture is a little dark, but . . .

I spent some time yesterday afternoon catching up with friends that I haven’t seen in a while. Just made some calls, went to school and saw my former fellow colleagues. Two lunch visits are now scheduled for next week.

I have also scheduled delivery of a new washer, something I’ve been putting off for more than two years. One of those new, super-efficient washers would be wonderful, but they’re too big for my space. I have a closet that holds the hot water heater and the washer and dryer. I recently had a new water heater put in and discovered that water heaters are much larger in diameter than they used to be. So are clothes washers–not in diameter, in width. The closet doesn’t get wider. In addition, since I dye all my yarns, I need a regular top-loading washer. After the dyeing is completed, I bring the yarns in, spin out the water, remove the yarns, fill the washer with water, put the yarns back, and let them soak for a while. Then I spin the water out and repeat the process. You can see that front-loading would not work. I’m getting a Speed Queen that’s 25.6 inches wide, close to the size of my current washer. Hope it works. It will be nice to be able to wash in cold water again. Haven’t had that option for over two years. I’ve also got the new roof scheduled for next week. Noisy time!

We went to the Modern Art Museum last night where they show “art” movies on the weekend. The movie last night was Waltz with Bashir, an animated documentary about a 1982 Israeli war veteran trying to regain memories of the war with Lebanon and the massacre of the Palestinians in the refugee camps there. The animation was like graphic novels and very good. This film has won several awards and was very interesting. Here’s the Wikipedia info.