It is said that the wind on the prairie drove some pioneer women mad. Maybe I’m there. The wind has been relentless this year, not even dying down after sundown. Hoping to find references to that phenomenon, I did a cursory research on the issue. I found one listing that looks interesting, a book called Pioneer Women: the lives of Women on the Frontier. Mentioned are several things I had not considered before about how dangerous the typical women’s clothing of the period could be. I had never thought about the possibility of a dress hem catching fire. Nor did I think about the hoops that were fashionable being caught in the wind. Now wouldn’t that be a sight! Hoops were removed and rocks tied to the hems, causing bruising of the shins. 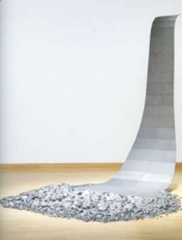 The Teresita Fernández installations at the Modern Art Museum are very nice. I wish there were pictures of my favorite, an installation reminiscent of a scattering of small stars floating on the wall. It wound its way around the room which had a door through which just a glimpse of Martin Puryear’s Ladder for Booker T. Washington could be seen. Would have made a really nice picture, but …oh, well. 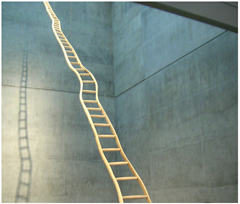