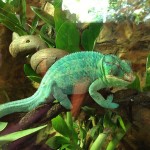 Gosh, it seems like a long time and not long enough. The boys went home yesterday. It was really hard to send them off, but now it’s time to get back into some kind of routine. It seems that everything we did was hot and sweaty!

One of the things we did while they were here is ride the train to the Dallas World Aquarium. The creature left 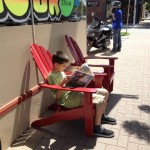 is one of the many pictures I took. The boys wanted one last trip to Benito’s before heading to the airport. They waited for me outside as I paid the bill. Waiting for me with newspapers in hand was a joke for me.

On the way home from the airport yesterday, I took a detour to 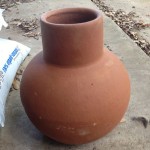 buy an olla, which I’ve been trying to find for a couple of years.

I dyed part of the ikat yarns while they were here, and my night hours are spent cutting the wraps off of those yarns. I put them on a towel because they’re still damp. This ikat 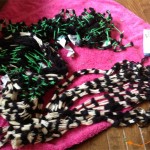 tape makes a mess, even though I try to be careful. You can see just a couple of the bits that get scattered (marked by the arrows). Multiply that by about a thousand. There’s still one more section to dye. I decided to dye them in sections because of probable dye lot variations. My evenings in the near future will be spent cutting off ikat tape–a mindless activity to be done while watching a movie.

Question–does anyone know of a way to convert treadles on a loom to treadles for a standing loom? Maybe there’s an engineering type out there that can think of a way. I really wish there was some way to stand and weave on my Cranbrook. I get really tired of sitting!