Proper on Magnolia hangs art, choosing new art every two months. So that’s where I’m hanging out through March. There will be a small reception Thursday, February 5, 7:00 PM.

Above is a simulation (since I couldn’t get a good picture) of the pieces hanging on the wall. In Fort Worth, we have two up and coming streets that are THE place to be–Magnolia and West Seventh. Both have lots of new restaurants, bars and other nice places to hang out. Magnolia is an old street with lots of two-story red brick buildings. I’ve long thought about using one of those buildings to have a studio. Well, not any more. Real estate in that area has exploded.

These pieces couldn’t be hung in the usual way, since nails could not be used. They have a rail at the top with some sort of covered wire that hangs from the rail. At the end of the wire is a hook that slides up or down as necessary. So, I put D-rings on the back of the boards, but I now wish I had put screw eyes on the top of the board because I think they would hang better that way. Live and learn, as they say. 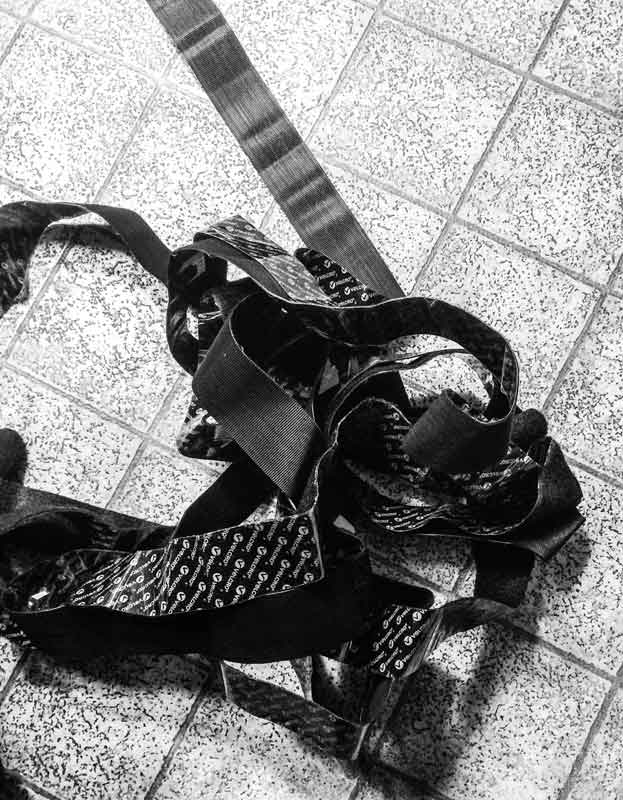 The piece on the left has always hung vertically, but I decided to change that up. Doing that means cutting a new board and attaching Velcro. Someday I’m actually going to order Velcro from Uline, because you can get just the hook part. You can see my Velcro mess here. You would think it would be simple, but it took a bit to get this mess untangled.

In between doing other things, I have warped the Mirrix and have begun testing some yarns. Thinking about making a change. I’ll post pictures next time.