Entirely understandable because of the events of March, 2011, I slipped into a habit that I don’t like. During that period of time, I zoned out in front of the TV every night as a way of numbing myself (also with the help of a margarita), hiding from my thoughts, who knows. That habit is no longer useful to me, and I am trying to stop it (the margaritas left after the first year). Saturday was Day 1 of no TV. During the day, that’s not a problem, but at night I would start to turn it on almost unconsciously.  Amazing how habits work, isn’t it? 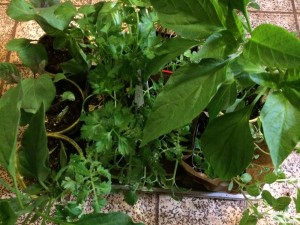 The weather turned on us again, even after I had declared that winter was over. Guess Winter wasn’t listening. I even bought some plants, although I know it’s too early to put them out. Cold, but there was a chance of rain, and we do need it, so I stopped complaining.

Then Sunday arrived, a beautiful day, much warmer, with sunshine. So it was definitely a day for working in the I-will-have-a-garden-this-year spot. It has become much grown over, so I’m doing the down and dirty method. It comes from an article in Mother Earth News about no-till gardening. On their Facebook page, there’s a link for another no-till garden article, but I can’t seem to get Mother to come up today. Maybe they’re having a problem, so here’s the link. My plan is to lay down a layer of newspapers, water them, and cover with mulch. When I get ready to plant, I’ll just plant seeds in the mulch. When putting in plants, just poke a hole through the newspaper layer. At least that’s the theory. With no TV and daylight savings time (grrrrr), I should have time to weave and garden. By the way, the article that I actually read is by Lee Reich. His blog is here. I also like to read A Way to Garden.