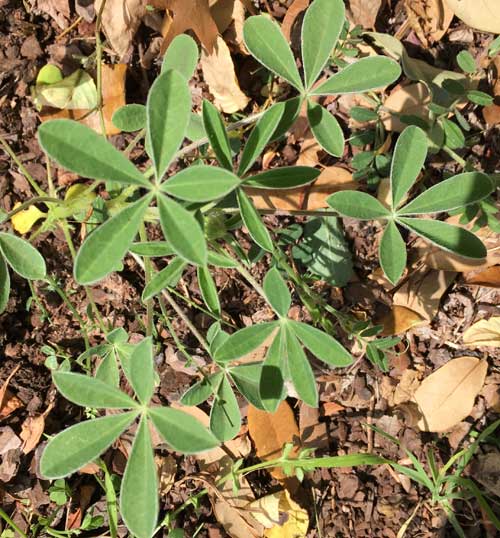 The latest project is now halfway complete on piece one. Since that’s pretty much all I have been doing, there’s really nothing to write about, unless you count the itty bitty bluebonnet plant I discovered while weeding. A couple of years ago, I threw out some wildflower seed balls that the boys and I made. Nothing happened the first year. Nothing happened the second year. But this year there is a bluebonnet plant, a lonely solitary plant. Making seed balls info can be found here and here.

Besides listening to books, the idiosyncrasies in the color of the hand-dyed yarn keeps my attention while weaving.  I noticed yesterday how different the colors looked between the singles and the plied yarns. These photos don’t really show the differences as distinct as they really are, but here they are anyway. The plied yarns are very tightly twisted and have a great sheen to them, so the differences might be because of light reflection, but I think it’s based on how they take up the color. Even if you cant tell from the yarns hanging out before being needle woven in, you can see in the woven portion that there are varying shades. 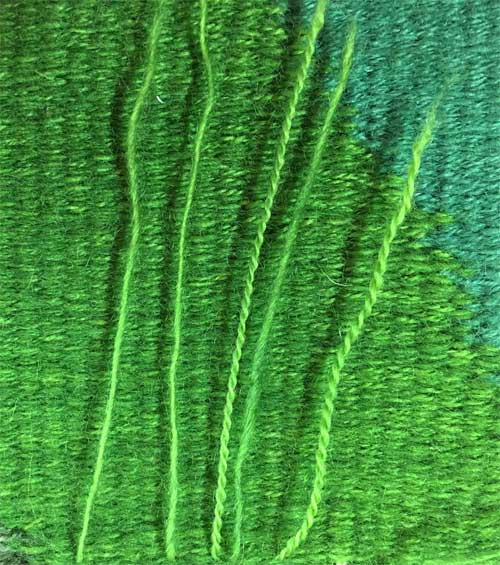 About the book—I am listening to I Am Pilgrim by Terry Hayes. At first I thought this book is not going to do. It’s slow to really get started, but as I listened, the action got faster and faster, and I wove faster and faster. Funny how that works. It’s a spy thriller, and it’s very long. The audio is divided into three parts. Most of the books I listen to are divided into two parts.

What I’m listening to

By the way, I’m trying very hard to update the blog at least once per week, most likely on Wednesdays. That doesn’t mean I won’t have a brainstorm or just be brimming with all kinds of weaverly or personal stuff on other days. Some days/weeks there’s lots to say, but when I am at the loom all day for days, well, there’s only so much to say about that.