The weaving of four pieces simultaneously is over. It seemed like it continued. And continued. They’re cut off, but as usual with these small pieces, they didn’t quite turn out like planned, but that’s my fault. I wanted them to be square-ish, but they’re not. I will make them that way.

A couple of weeks ago, I went to the Kimbell for a program called Precious Adornments: Figurines in the Ancient Andes. Since I love the ancient cultures of this region, it was a must do. I wasn’t sure what to expect, but this is the description of the program:

This talk will focus on small-scale humanlike figurines from early pre-Inca cultures along the western coast and highland Andes of modern-day Peru. These anthropomorphic figurines—created in clay, wood, stone, bone, or shell—range in size from miniature pendants to doll-like effigies. Some of these precious objects were worn, and some were adorned with textiles, shell inlay, or precious stones, thus reflecting differences in their function, value, and meaning. 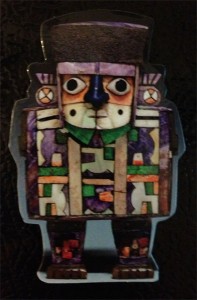 I wish there were pictures, but there aren’t, so I’ll have to resort to one I’ve posted earlier. this is a picture of a magnet that I bought during the Wari exhibition. Hard to believe he’s only 4 inches high. He’s inlaid with shell and stone. A better picture is here.

I plan to get to Peru within the next year or two. Just as soon as my knee is better. And since I’m on the subject of Peru, did you hear about what Greenpeace did? This was so totally unbelievable to me. They put huge letters along side the Nasca hummingbird. No one, not even presidents, are allowed to walk along the Nasca lines, yet these idiots went in there and laid out these huge letters trying to draw attention to the environment. Yes, the environment needs attention, but this? The Nasca lines are a World Heritage Site. Geez! Okay, rant over.

Actually, not a lot of art is being done at the moment. I always have a hard time balancing all the personal stuff/chores, the weaving, and the art biz stuff. It seems I do one or the other. I always plan out my week on Sundays, but it never works. Even though all my appointments are in my phone and online, I still keep a paper calendar book for my everyday planning. So, I get out my phone, look 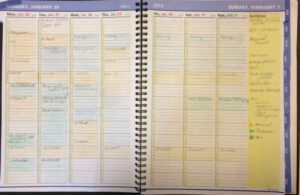 to see what’s on the calendar for the week, plug those in on paper, and work around that to get my to-do list in place. Someone mentioned they use a color coded spreadsheet, so I decided to try that on my usual calendar. Using colored pencils, I lightly colored in blocks. It looks good, but will it work? Who knows. And even if it does, how long will that last.