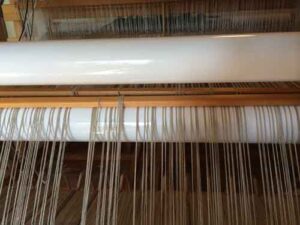 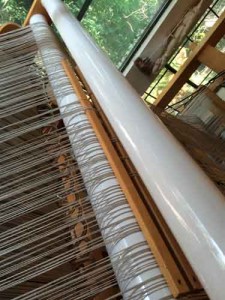 Yep, this is my first time using linen as warp. And yes, this is embarrassing to relate, but … What I thought was my perfectly tensioned–okay, not perfectly, but good–warp is not so much. I consistently had some loose warps, which is a problem when that warp in the interlock warp. First I tried hanging weights from the offending warps. Didn’t work so well. Then I had the brilliant idea of raising those warps and inserting a stick. Better, but they moved when I advanced the warp. Duh! 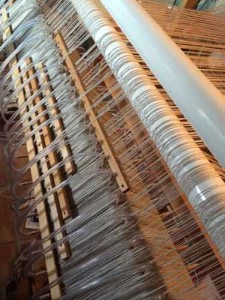 ( Several sticks, pulled down closer to the warp beam. So far, so good.

They worked best when the sticks rested on the beam above the warp beam. More sticks, new location. Works! By the way, I am the full 60 inches of the warp width. All the ends are through the heddles and reed, but the extra width hangs in front when it’s not being used. When I finish a piece, I cut off the extra part also and use that to measure how much of the warp I’ve used.

(Each peg of the sectional warp beam has tubing over it in the hope that warps won’t get tangled or caught on the pegs. Only works sometimes.)