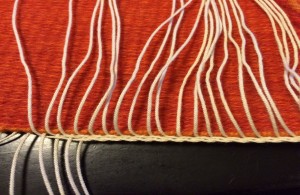 Here’s what I’ll be doing this week. All week. There are two pieces that need their warps taken care of. Plus, there’s a jam-packed calendar of things, some fun, some just necessary.

One of the pieces that I’m working on is one that I just thrust aside after cutting it off the loom because it had caused so many weaving problems. It was redesigned a few times mid-weave and just wasn’t what I’d intended. After a rest, I decided it wasn’t THAT bad, so it’s getting a warp fix. Then I’ll think about it again and decide if it’s ever going to make it out of the basket it sits in.

The good news is that the warp is tied on the loom again. If I could decide on a direction, I could weave.